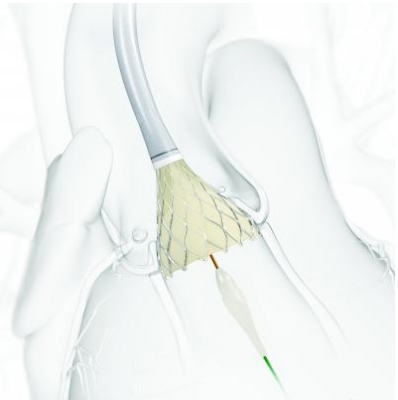 An illustration of the self-expanding CoreValve Evolut R TAVR valve half deployed in the aortic root.

July 10, 2017 — The U.S. Food and Drug Administration (FDA) has cleared an additional indication to expand the use Medtronic's self-expanding CoreValve Evolut transcatheter aortic valve replacement (TAVR) platform to patients deemed to be at intermediate risk for open-heart surgery.

Patients who are at intermediate risk for open-heart surgery have a risk of mortality of less than or equal to 3 percent at 30 days following the procedure. The risk assessment is determined by a heart team (including an interventional cardiologist and cardiac surgeon), in combination with the Society of Thoracic Surgeons (STS) score and other factors, such as co-morbidities, frailty, prior surgical intervention and disabilities.

"As evidenced by the landmark SURTAVI trial, the CoreValve Evolut platform is well-suited for the intermediate-risk patient population due to its supra-annular design for unsurpassed hemodynamics, low rates of mortality and disabling stroke, earlier improvement in quality of life, fast functional recovery times and short hospital stays," said Michael Reardon, M.D., professor of cardiothoracic surgery and Allison Family Distinguished Chair of Cardiovascular Research at Houston Methodist DeBakey Heart & Vascular Center. "It's important to consider that in the first 30 days, patients treated with TAVR showed functional improvements and lower rates of stroke than the surgical patients in the study."

Watch a video interview with Reardon at the American College of cardiology (ACC) 2017 meeting where he presented the SURTAVI results.

In collaboration with leading clinicians, researchers and scientists worldwide, Medtronic offers the broadest range of innovative medical technology for the interventional and surgical treatment of cardiovascular disease and cardiac arrhythmias. The company strives to offer products and services that deliver clinical and economic value to healthcare consumers and providers around the world.

The Edward Lifesciences Sapien valve, the only other TAVR valve currently cleared for use in The U.S., gained the intermediate risk indication last August. Read the article “FDA Expands Sapien TAVR Valve Indication to Intermediate-Risk Patients.”

Watch a VIDEO interview with Reardon at TCT 2016 on the state of TAVR.

Last year at ACC 2016, the biggest news was that the Sapien 3 valve out performed surgery in intermediate risk surgical patients. Read more about that trial and others