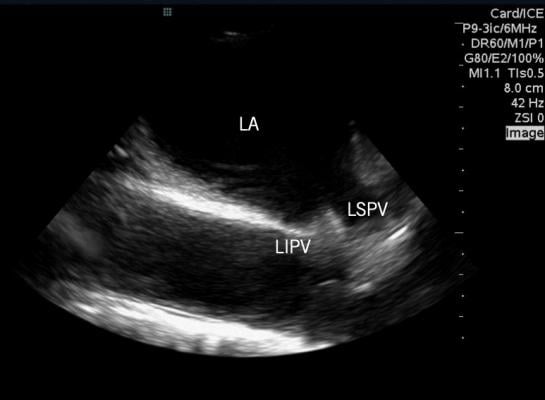 An example of intra-cardiac echo (ICE) imaging showing two of the pulmonary veins, anatomical landmarked used during ablation procedures to treat atrial fibrillation. This example is from the ICE system used by St. Jude Medical.

Catheter-based intra-cardiac echocardiography (ICE) is an imaging modality similar to intra-vascular ultrasound (IVUS). It allows imaging inside the heart to visualize cardiac structures and blood flow using Doppler imaging. The standard-of-care for this type of imaging is usually transesophageal echo (TEE), but ICE proponents say the intra-cardiac modality has several advantages.

The image quality is comparable to TEE, but the real advantage is the cardiologist controls the catheter instead of a sonographer, eliminating a second operator, explains Jay Lee, medical director of electophysiology (EP) at Hoag Heart and Vascular Institute, Newport Beach, Calif. He said ICE also provides more versatility than the limited view provided by TEE, because the catheter can be maneuvered to see more inside the heart and the aortic root. Unlike TEE, ICE does not require general anesthesia.

ICE has applications for structural heart imaging of the left atrial appendage (LAA), to aid in septal defect closures and visualizing the fossa ovalis, and plays a role in transcatheter valve replacement. It also is used in EP procedures for ablation catheter guidance.

EP Guidance
Lee primarily uses ICE for transcatheter EP ablations to treat atrial fibrillation (aFib), ventricular tachycardias and the pulmonary vein. In EP transcatheter ablation procedures, ICE confirms the exact location of the catheter tip to aid with more accurate ablations. ICE also can  help with safety monitoring of the pericardial space for tamponade or pericardial effusion caused in rare cases by either the transeptal puncture or the ablation, Lee said.

“It’s a wonderful tool to help us guide our procedures more accurately,” Lee said. “We also have found some new areas for ICE in the EP lab…I find it very useful with access and safety. We also find it useful for treating ventricular tachycardias.”
Hoag uses the Carto EP mapping system, which is compatible with Siemens’ ICE system. GE, Boston Scientific and St. Jude also offer ICE systems.

From his experience, Lee said rotational imaging offers about 2 cm field-of-view (FOV) of clear imaging (Boston Scientific says its system images up to 14 cm), which is good for the septum and the fossa ovalis. But due to the limited FOV, he said most EP labs will find phased array systems more useful, with vendors claiming imaging depths of up to 30 cm.

Boston Scientific’s Ultra ICE system uses radial ICE imaging, which is not steerable and is limited to 2-D imaging. The Siemens, GE and St. Jude systems are steerable and offer 2-D, color and spectral Doppler capabilities.

These catheters cost a couple thousand dollars each, which has led to resistance to widespread adoption, Lee said.

The Future of ICE
Lee said ICE works in tandem with EP mapping systems now, but further integration in the future will lead to more procedural accuracy. Mapping systems can import computed tomography (CT) images to use as a map of the heart, but the image is not in real time. Lee expects future systems to allow registration of the echo image with the mapping system for live imaging. 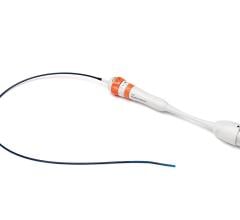 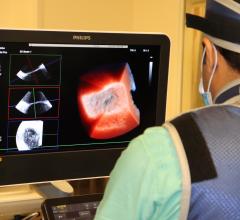 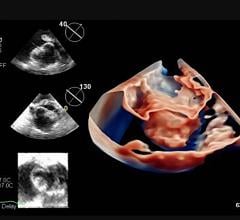 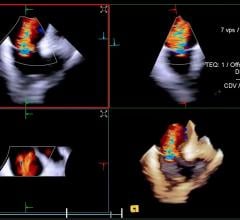 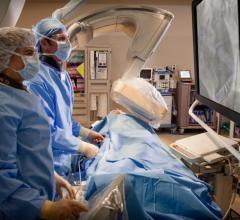 September 20, 2017 — Catheter ablation to treat an irregular heartbeat, which limits or eliminates patients’ exposure to ... 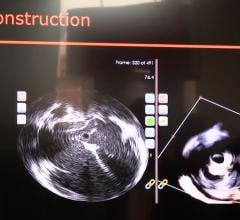 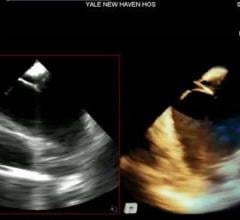 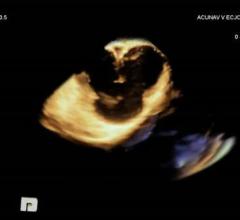 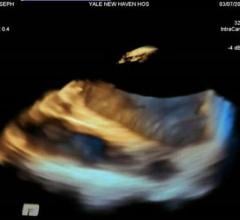