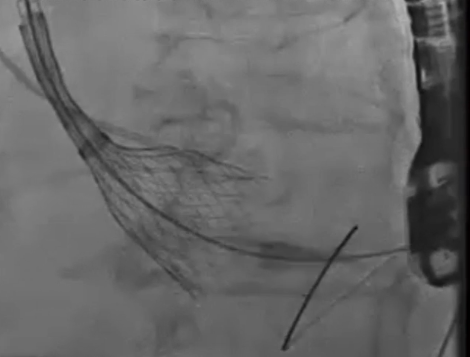 May 16, 2016 — The largest observational study of percutaneous transfemoral transcatheter aortic valve replacement (TAVR) demonstrated that moderate sedation use is associated with improved patient outcomes, including lower 30-day mortality and shorter hospital stays, as compared to traditional general anesthesia. This STS/ACC TVT Registry analysis was presented as a late-breaking clinical trial at the 2016 Society for Cardiovascular Angiography and Interventions (SCAI) annual meeting.

TAVR has become the therapy of choice for patients who are considered at extreme or high-risk for standard open surgical aortic valve replacement, with recent data supporting extension of the therapy into intermediate-risk populations. While general anesthesia has been typically administered during these cases, rates of moderate sedation use for this minimally invasive technique are increasing.

“TAVR is revolutionary, but the question we asked ourselves is what novel techniques are being employed to make the therapy even better and as noninvasive as possible?” said Jay Giri, M.D., MPH, an assistant professor of cardiovascular medicine in the Perelman School of Medicine at the University of Pennsylvania, Philadelphia, and the study’s senior investigator. “Now that we are routinely treating patients without incisions, is moderate sedation a safe and effective option for TAVR?”

Investigators compared the effectiveness of moderate sedation and general anesthesia use among STS/ACC TVT Registry patients between April 2014 and June 2015. The registry is comprised of all U.S. TAVR patients and elective cases treated via percutaneous transfemoral approach and all were included in the analysis. A total of 10,997 patients were assessed, and of these 1,737 (15.8 percent) received moderate sedation.

Importantly, propensity-matched analyses, which accounted for factors known to predict 30-day TAVR mortality, confirmed lower 30-day mortality (2.96 vs. 4.01 percent, p<0.0001) and 30-day mortality or stroke (4.8 vs. 6.36 percent, p<0.0001) among the moderate sedation patients. Nationally, 5.9 percent of moderate sedation patients converted to general anesthesia, which was comparable to the 5.2 percent rate observed at the University of Pennsylvania Health System according to Giri.

“This compelling data shows that moderate sedation is both safe and effective. While it is important to assess each patient individually, using moderate sedation could result in a better experience and better clinical outcomes for patients,” said Giri. “A broad shift towards moderate sedation for TAVR could have profound implications for care pathways, costs and the future of this technology.”

Giri reports grants to the institution from St. Jude Medical for service as site co-primary investigator of the PORTICO trial of transcatheter aortic valve replacement.