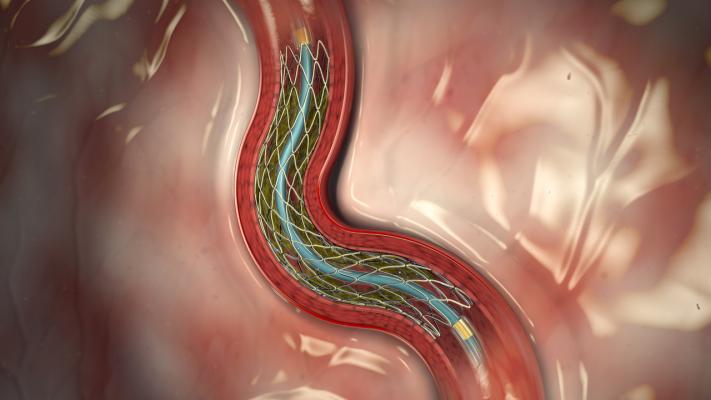 There was a lot of hype and high hopes pinned on bioresorbable stent technologies as the way of the future two years ago. But the Absorb stent was not able to match the performance or outcomes of the current standard-of-care metallic drug-eluting stents (DES). Since the Absorb was pulled off the market in 2017, vendors have refocused efforts on refining metallic DES.

The current market-leading coronary stents — the Abbott Xience, Boston Scientific Promus and the Medtronic Resolute — all perform very well and have patient outcomes that are comparable within a percentage point or so of each other. All these devices have adverse event rates and restenosis rates below 5 percent, making any future clinical trials to show superiority of a new stent a very expensive prospect because of the number of patients that would be needed to power such a study. For these reasons, the coronary DES market has become very mature in the past few years and stents have largely become a commodity where hospitals are buying devices based on price more than on clinical data.

There is continued innovation, but most of this focus has been on small refinements like making stents more deliverable in tortuous vessels, reduction of stent strut thickness, and launching smaller diameters or longer lengths. One of the most recent examples of these stent updates was the release of the Xience Sierra, which gained U.S. Food and Drug Administration (FDA) clearance in May 2018. Improvements include a thinner profile, increased flexibility, longer lengths and small diameters to address more complex percutaneous coronary interventions (PCI).

Medtronic also gained FDA approval in February 2018 for the Resolute Onyx 2 mm, which is the smallest-sized DES on the market. The Resolute Onyx DES platform uses continuous sinusoid technology, which involves forming a single strand of cobalt alloy wire into a sinusoidal wave to construct a stent. To improve the radiopacity of the small stent on angiography, it has a new metal core inside the wire to make it more visible.

In December 2017, Medinol gained FDA clearance for the Elunir DES, which has one of the narrowest strut widths of any stent on the U.S. market. Its small profile and radiopaque spring tip make it easier to maneuver in heavily calcified or intricately curved blood vessels. Cordis distributes the stent in the U.S. market.

Below are a few larger trends that go beyond incremental changes that may alter the direction of coronary DES technology.

DES use a polymer coating as a carrier for the antiproliferative drugs. These polymers are formulated to prevent the drug from eroding off the stent's surface during delivery and to control drug elution over time to prevent neointimal hyperplasia restenosis from the vessel trauma caused by stent deployment.

However, the polymer itself causes inflammation in some patients and the antiproliferative drugs can hinder endothelialization of the stent struts so it can be incorporated into the vessel wall. This can lead to late-stent thrombosis that can reocculude the vessel. So the search for a better mousetrap continues with new ways to reduce or eliminate the polymer to reduce the late-event rates. Several strategies have been developed, including abluminal-only coated stents, polymer-free drug coatings and the use of bioresorbable polymers on metallic stents.

Two of these approaches are incorporated in the Boston Scientific Synergy everolimus-eluting platinum chromium coronary stent system, approved by the FDA in October 2015. It is the first stent on the U.S. market to use an abluminal bioabsorbable polymer coating. The polymer is absorbed shortly after the drug elution is complete, around three months after implant. This provides rapid healing and freedom from long-term polymer exposure. The stent has one of the lowest late-stent thrombosis rates among DES on the U.S. market.[1] Definite stent thrombosis rates across nine studies including more than 19,000 patients ranged from 0-0.2 percent.[2-9]

The Biosensors BioFreedom stent uses a polymer-free coating of Biolimus A9. It is directly coated to the abluminal surface of a stainless-steel stent. Its LEADERS FREE II U.S. pivotal trial showed the Biofreedom was superior to bare metal stents in patients with high bleeding risk who were able to take only one month of dual antiplatelet therapy (DAPT). The study included 1,203 patients who received the Biofreedom, compared to 1,189 patients who received the bare-metal stents. The primary safety endpoint of cardiac death or myocardial infarction (MI) at one year for the Biofreedom vs. BMS was 8.6 vs. 12.3 percent. The primary efficacy endpoint at one year for TLR was 6.1  vs. 9.3 percent. When the data was presented at the 2018 Transcatheter Cardiovascular Therapeutics (TCT) meeting, many experts said the stent has the potential to make bare metal stents obsolete.

The OrbusNeich Combo Dual-therapy Stent uses a unique combination of an abluminal bioresorbable polymer coating with a biological anti-D34 antibody coating to accelerate endothelial healing by circulating endothelial progenitor cells. All the sirolimus used on the stent is released in 30 days and polymer absorption takes place in 90 days. The company has European CE mark approval and has an indication for a minimum of three months DAPT in acute coronary syndrome (ACS) patients

Results from the HARMONEE Japan/U.S. Registration Trial were first reported at the 2017 Transcatheter Cardiovascular Therapeutics (TCT) meeting. Data demonstrated the Combo compared favorably to the Xience stent for treating patients with significant ischemic heart disease. The primary endpoint of target vessel failure (TVF) was 7 percent in the Combo group vs. 4.2 percent in the Xience group at 12 months, which met the non-inferiority requirement (P = 0.020). The trial is enrolling a total of 572 patients at 50 hospitals in Japan and the U.S. An independent quantitative coronary arteriography core laboratory reported in-stent late loss at one year of Combo vs. Xience of 0.293 vs. 0.219 mm and in-segment late loss of 0.229 vs. 0.220 mm respectively. Additionally, the angiographic in-stent restenosis of Combo vs. Xience was 1.3 vs. 2.6 percent, and in-segment restenosis was 2.5 vs. 3.9 percent. OrbusNeich said the study results will be used for a planned U.S. trial.

Another technology is the Hexacath Titan Optimax titanium nitride oxide (Ti-NO) bioactive surface stent. Instead of antiproliferative drugs, its unique coating is designed to reduce inflammation and platelet aggregation and promote re-endothelialization on the stent surface. The Titan stent is available in 40 countries, but does not have FDA clearance. The late-breaking TIDES-ACS Trial for the device included 1,491 acute coronary syndrome patients and was presented at EuroPCR 2018. The study found the Optimax was superior to the Synergy stent at 18 months.

Since the drug-carrier polymers of DES have the potential to cause late-stent thrombosis, the standard prevention is use of long-term dual antiplatelet therapy. However, DAPT may cause increased bleeding issues, so there have been an increasing number of studies to gather clinical evidence showing how and when patients can safely be taken off DAPT with various stents.

Abbott began enrolling patients it its XIENCE 28 GLOBAL DAPT Trial in February 2018. It is evaluating 28 days of DAPT in patients at high risk of bleeding after implantation with a Xience DES. It is a prospective, single-arm, multi-center, open label, non-randomized study. The goal is to assess whether one month of DAPT is non-inferior to at least six months of DAPT in high-bleeding-risk patients. The primary endpoint is a composite rate of myocardial infarction, stent thrombosis, death, stroke or major bleeding between one and six months. Approximately 800 patients will be enrolled at 50 sites across Europe and Asia.

Elderly patients undergoing PCI often receive bare-metal stents (BMS) instead of DES to shorten the duration of DAPT and reduce bleeding risk. However, results from the SENIOR Trial found that compared with BMS, shorter DAPT combined with the Synergy bioabsorbable polymer DES leads to less adverse events without increasing bleeding risk.[10] The findings were reported at TCT 2017.

Prior to randomization, 1,200 patients aged 75 and older underwent pre-specification of a tailored DAPT strategy: one month for patients with stable angina or silent ischemia, and six months for patients with ACS (including myocardial infarction). About half of patients were in each category based upon clinical presentation. After the intended duration of DAPT was recorded, 596 were assigned to DES and 604 were assigned to BMS. DAPT utilization was similar in both study arms, with about half of patients continuing DAPT beyond one month, and only 20 percent of patients (in both groups) continuing DAPT beyond six months.

“The elderly represents a fast-growing segment of the population undergoing PCI. They have been poorly represented in prior studies on DES and DAPT duration, so there is no clear recommended PCI strategy for this group,” said principal investigator Olivier Varenne, M.D., Ph.D., with the cardiology department at Cochin Hospital in Paris, France. “The SENIOR trial shows that among elderly patients who undergo PCI, a DES and a short duration of DAPT is superior to BMS with respect to the occurrence of all-cause mortality, myocardial infarction, stroke and ischemia-driven TLR. Therefore, BMS should no longer be used as a strategy to reduce DAPT duration in these patients.”

In late 2017, Medtronic launched a global randomized clinical trial evaluating one-month DAPT in patients implanted with the Resolute Onyx DES. The study is aimed at gathering data to change DAPT guidelines that currently favor bare-metal stents (BMS) toward newer-generation DES in patients with stable ischemic heart disease who might require a shorter dual antiplatelet regimen. It will enroll up to 2,000 patients at 70 sites worldwide. Results from the RESOLUTE ONYX ONE-MONTH DAPT Study will also build on the RESOLUTE Pooled DAPT Interruption analysis that showed no increased risk of stent thrombosis with DAPT interruption or discontinuation after one month.

CeloNova BioSciences Inc. has an ongoing U.S. clinical trial of its Cobra PzF NanoCoated Coronary Stent (NCS) with 14-day DAPT in patients who are at high bleeding risk. The COBRA REDUCE Trial will assess 14-day DAPT after PCI. The trial is evaluating whether Cobra PzF NCS with its ultra-pure, ultra-thin Polyzene-F (PzF) fluoropolymer can optimize clinical outcomes with the two weeks of DAPT compared to FDA-approved DES with three or six months of DAPT. It will enroll up to 996 patients across 60 centers in the United States and Europe. Clinical data from CeloNova's previous trial, the PzF SHIELD Study, demonstrated the device supports very low risk for late ischemic events and low risk for clinically driven total lesion revascularization with a short, one-month DAPT minimum.[11,12]

"The highly-anticipated COBRA REDUCE trial aims to expand upon the SHIELD study's exceptional clinical results and demonstrate Cobra PzF NCS as a safe and effective stent option when combined with 14 days of DAPT," said Donald Cutlip, M.D., executive director of the Baim Institute for Clinical Research (formerly Harvard Research Institute). "I have many patients at high risk of bleeding or who have difficulty maintaining even short-term DAPT regimens. Being able to provide a therapy that is personalized to the patient is of great clinical value."

The Next Step in Bioresorbable Stent Technologies

VIDEO: The Current State of Bioresorbable Stents in 2018 — Interview with Patrick Serruys, M.D.

VIDEO: Use of the Tryton Dedicated Bifurcation Stent — Interview with Philippe Genereux, M.D.

VIDEO: What Went Wrong With the Absorb Stent? — Interview with Ajay Kirtane, M.D.