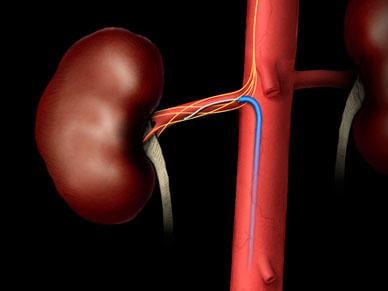 An example of renal denervation therapy being delivered. A catheter is inserted into the renal artery to ablate the nerves in the vessel wall that regulate vasoconstriction. This leaves the vessel permanently in the widest open position to allow greater blood flow to the kidneys.

May 30, 2018 — Despite the best efforts of clinicians to manage hypertension, it continues to increase and is now reaching epidemic levels worldwide with more than 1 billion patients considered to be suffering from hypertension today. Despite the availability of many safe and effective drugs, the control rates remain unacceptably low. This is mainly due to patient non-compliance in taking hypertension medications.

Two new late-breaking renal denervation trials presented at EuroPCR hold promise that this technology might be able to address this concern — the SPYRAL HTN-ON MED study and the RADIANCE-HTN SOLO study.

“I don’t think the medical community fully appreciated the seriousness of the adherence problem in hypertension before the device-based clinical trials, which only reinforced the previous findings that adherence gets worse with the increasing number of antihypertensive medications a patient is taking," said Felix Mahfoud, M.D., FESC, Saarland University Hospital, Germany, speaking on behalf of PCR.

"We know that half of the hypertensive patients become non-adherent in the first year after initiation of drug treatment and about 20 percent are completely non-adherent," he continued. "In recent years, clinical trials for device-based treatment of hypertension have further underlined the seriousness of this adherence problem for the medical community as a whole, especially reinforcing earlier findings that adherence gets worse with the increasing number of anti-hypertension medications a patient is taking."

Faced with the challenge of finding viable solutions to this public health issue, the concept of device-based treatments remains promising and is under careful investigation. The continued evolution in the devices and techniques themselves, along with a deepening understanding of patient selection have the potential to lead us to new insights into possible treatment options for this disease.

There is renewed interest in renal denervation therapies, as emerging data further illuminate the different mechanisms at work in these treatments and demonstrate their therapeutic value.

During the ESC annual meeting last year, important data were presented which demonstrated statistically significant and clinically meaningful reductions in blood pressure following renal denervation (RDN) in patients not taking anti-hypertension medications, either throughout medication washout or in the treatment of newly diagnosed hypertensives. Also, an ambulatory blood pressure monitoring (ABPM) analysis, presented at the 2017 ACC Scientific Sessions, showed that renal denervation is “always on”, even during high-risk periods such as in the early morning hours, when a drug’s effect may be subsiding or absent.

This year, at EuroPCR 2018, two important studies on renal denervation for hypertension treatment were presented and simultaneously published in The Lancet.

The prospective, randomized, sham-controlled RADIANCE-HTN SOLO study used an ultrasound catheter to achieve renal denervation. A total of 146 were randomized to renal denervation (n=74) or sham procedure (n=72). Using this device, the investigators have now documented significant changes in office and ambulatory blood pressure following renal denervation, but not in the sham treated patients (baseline-adjusted difference between groups: -6.3 mmHg). The primary efficacy and safety endpoints of this trial were met.

What Do We See For The Future of Renal Denervation?

For any therapy to be effective it is critical to understand which patient will – or will not – respond favorably to the technique. The data presented during EuroPCR 2018 will inspire new approaches to answering these questions, Mahfoud said. "While there are some interesting hypotheses and views in the community, for the moment we look forward to continued preclinical and clinical investigations and research, which will hopefully allow us to further define patient selection for RDN. Other unanswered questions concern procedural parameters for successful renal denervation or whether the proven blood pressure-lowering effects are sustainable at long-term follow-up," he said.

He said sespite decades of effort to control hypertension through lifestyle adjustment and medication, the challenge remains. "There is a huge unmet need," he said. "New approaches are critical and needed in order to increase control rates and reduce patient risk. Progress exists, the work continues."