Hospitals explain what it takes to implement a TAVR program 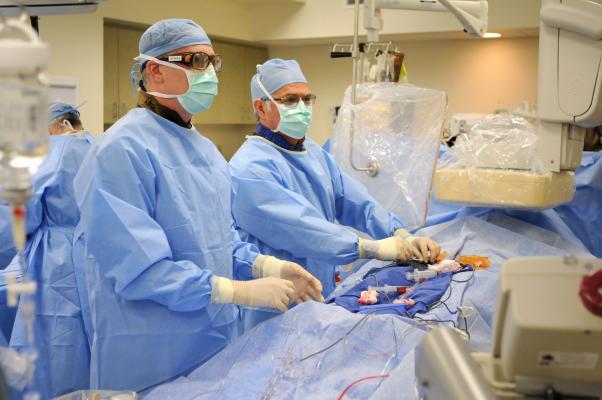 Transcatheter aortic valve replacement (TAVR) is not only a breakthough minimally invasive medical therapy, but offers a new business opportunity for hospitals that begin a program. The technology is viewed as cutting edge not only with clinicians, but also among the general public. This can be leveraged to promote the hospital as a cutting-edge facility and help attract new patients. However, creating these programs requires long-term financial, professional and equipment commitments, which may not be right for all hospitals. There are also concerns that a proliferation of TAVR centers may make programs less profitable and reduce the proficiency of any one center as patient volumes decrease if patients are spread between many competing hospitals.

Hospitals Say ROI is From Surgery, Not TAVR

The initial experience of TAVR centers that began programs immediately after U.S Food and Drug Administration (FDA) approval of the first TAVR device in November 2011 was that referrals increased. However, between new referrals and patients seeking out transcatheter valve programs on their own initiative, the majority of these patients did not meet the narrow indication for TAVR. Most of the patients who did not qualify, however, often stayed with the hospitals for surgical aortic valve replacement (SAVR). Centers said the current costs to start a TAVR program and the combined costs of the devices and care actually make the transcatheter procedure more expensive, despite the minimally invasive nature of the procedure and shorter hospital stays. However, most centers agree that while TAVR was not initially a windfall of new profits, the programs did attract more patients by default to their surgical programs, thus boosting surgical procedure volume.
“Before the program started, we were doing 220 surgical aortic valve cases. Now we are doing about 340,” said Wes Pedersen, M.D., FACC, FSCAI, director transcatheter valve therapy program, interventional cardiology at the Minneapolis Heart Institute Foundation, Abbott Northwest Hospital. He said the hospital has seen a 10-percent increase in conventional surgical patients after the implementation of a TAVR program.

Costs to Develop a TAVR Program

Minneapolis Heart Institute Foundation did not have a hybrid operating room (OR) before the TAVR program. “That’s the biggest expense,” said Pedersen, who explained it takes about $5 million to build out a hybrid OR.
To pay for itself, Pedersen said a hospital should aim to perform 60-80 TAVRs a year. If a facility does not need to build a hybrid OR, Pedersen said about $1 million is needed to get started. This includes between $500,000 — $600,000 for infrastructure, including full-time employees and computer networks. These components are needed partly to supply procedural data to the combined Society of Thoracic Surgeons (STS) and American College of Cardiology (ACC) Transcatheter Valve Therapy (TVT) Registry, which is mandatory. Additional costs are incurred when purchasing the valves and delivery systems from valve companies (Edwards Lifesciences and Medtronic). Pedersen said the vendors require hospitals purchase the valves up front — about $200,000 worth, which is about six valves.
A hybrid OR includes all the same sterility, ventilation and open procedure requirements as a normal OR, but has additional equipment to facilitate interventional procedures. This is usually centered around a fixed-based, high-end angiography imaging system. Some hospitals have opted for less expensive hybrid catheterization labs, which offer many of the features of a hybrid OR but without many of the provisions needed for true open-chest surgical procedures.
The Henry Ford Center for Structural Heart Disease, located in Detroit, Michigan, began its TAVR program in March 2012. The hospital already had a hybrid OR before implementing the program. But, due to an increase in the volume of TAVR patients, the facility built a second hybrid cath lab to accommodate the growing traffic.
Besides needing a hybrid OR and possibly extra equipment, a plan needs to be in place before an institution decides to open a transcatheter program, said interventional cardiologist Adam Greenbaum, M.D., co-director of the Henry Ford Center.

VIDEO: What is Required for Interventional Echo

TAVI ROI Will Come From Surgical Referrals, Not TAVI

How to Plan for a Hybrid OR

The Making of a Hybrid OR