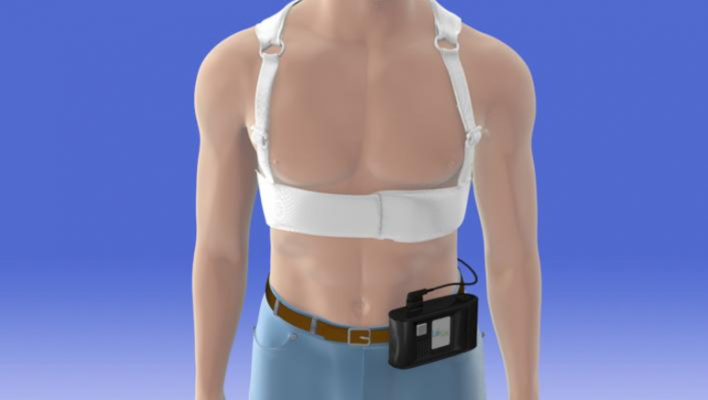 May 11, 2017 — A new study shows that the use of a wearable cardioverter defibrillator (WCD) is safe and effective in treating ventricular arrhythmias for pediatric patients who are at risk for sudden cardiac death (SCD). The study represents the largest pediatric patient population to date when evaluating the WCD as a therapy option. The findings of the study were presented at Heart Rhythm 2017, the Heart Rhythm’s 38th Annual Scientific Sessions.

In populations known to be at high-risk for sudden cardiac death (SCD, also called sudden cardiac arrest), implantable cardioverter defibrillator (ICD) placement has shown to improve survival. These at-risk populations include survivors of a cardiac arrest, along with certain high-risk populations with cardiomyopathies, channelopathies, and congenital heart disease. WCD is non-invasive, worn outside the body like a vest, and does not require surgical implantation. It can be used in situations where ICD placement is not ideal, for instance, when a patient requires replacement of an ICD (infection or mechanical issues), is awaiting an ICD implant, as a bridge for heart transplant or in high-risk patients that do not require placement of a permanent ICD as the patient’s condition may improve.

The study included 455 U.S. pediatric patients who wore a WCD for at least one day from Dec. 31, 2009 to Sept. 14, 2016. The median age of the patient population was 15 years old and median duration of WCD use was 33 days. Clinical indication and diagnosis were recorded from the ICD-9/10 codes. The common cardiac diagnoses for which the WCD was used included: 180 (40 percent) cardiomyopathy, 101 (22 percent) congenital heart disease, 60 (13 percent) ventricular arrhythmias, 61 (13 percent) channelopathy and 40 (9 percent) history of prior cardiac arrest (with no other diagnosis). Sixty-three (14 percent) of the entire population had the WCD placed for repair or replacement of an existing ICD. Of the remaining 392 (86 percent) patients, 30 percent had a previous cardiac arrest.

Eight patients (1.8 percent) received at least one shock treatment. Two patients (0.4 percent) had one inappropriate treatment each (asystole and artifact). Of the six patients (1.3 percent) who received appropriate therapy, there were seven episodes of either polymorphic ventricular tachycardia (VT) or ventricular fibrillation (VF) with a total of 13 treatments delivered. All episodes were successfully converted and the patients all survived. The WCDs were discontinued most commonly for placement of an ICD in 195 (43 percent) patients, improvement of ejection fraction in 67 (15 percent) patients and heart transplantation in 20 (or 4 percent) of patients. There were seven deaths (1.5 percent), which all occurred when the patient was not wearing the WCD.

“Research about wearable defibrillators in the pediatric population is very limited, so the results of this study are encouraging. In this large group of patients, we found that the therapy is safe,” said lead author, David Spar, M.D., assistant professor, University of Cincinnati Department of Pediatrics, Cincinnati Children’s Hospital Medical Center. “The results are comparable to that of the adult population who use wearable defibrillators and provides reassurance that we can consider this to be an effective therapy enabling young patients to leave the hospital and return to their daily activities.”

The authors note that the observational reports should be substantiated by future clinical studies to better understand this therapy option and evaluate the cost effectiveness.