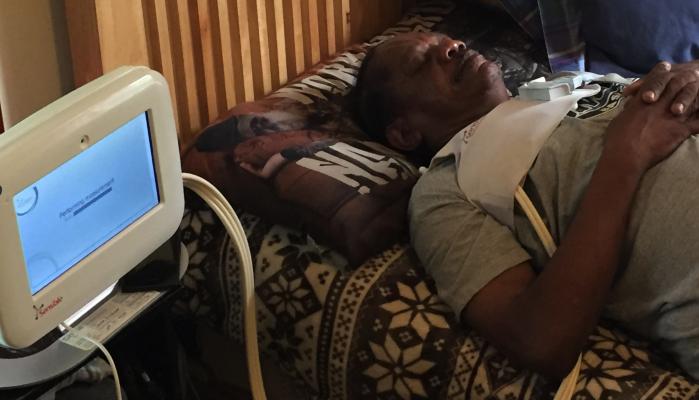 June 28, 2017 — Doctors at The Ohio State University Richard M. Ross Heart Hospital are testing a high-tech vest that measures fluid inside the lungs from outside a person’s clothing. It could be a new way to prevent repeated trips to the hospital for the nearly 6 million Americans living with heart failure.

The SensiVest, created by Sensible Medical, uses radar technology that was first used by the military and rescue teams to see through walls and rubble in collapsed buildings.

“Now the technology has been miniaturized and put into a form that allows the radar to go through the chest wall and get an accurate measurement of water inside the lungs,” said William Abraham, M.D., director of the Division of Cardiovascular Medicine at Ohio State Wexner Medical Center. “With heart failure, the heart isn’t strong enough to keep up with the body’s needs and fluid stays in the lungs. Too much fluid makes it hard to breathe.”

Until now, cardiologists have not had a non-invasive way to proactively monitor for fluid changes. The standard has been to rely on patients weighing themselves daily and reporting symptoms such as swelling or shortness of breath. By then, it could be serious enough to require treatment in the hospital.

“We’ve learned these methods don’t catch the disease progression early enough, and that’s why hospitalization and re-hospitalization rates for heart failure have changed very little in the last 20 to 30 years,” Abraham said.

So doctors are testing the vest in a national, randomized clinical trial to see if it effectively monitors and manages lung fluid, reduces hospitalizations and improves quality of life. Abraham leads the trial that includes approximately 40 sites across the country.

All patients enrolled in the trial receive the highest standard of care for heart failure. Those randomized to the treatment group will also use the lung fluid monitor at home to take daily readings. The vest is worn over clothing and a reading takes approximately 90 seconds. The data is uploaded to a secure server where the patient’s cardiologist or nurse can review it.

“We can use that data to see when the lungs are trending towards being too wet and make adjustments to the medication on an outpatient basis or over the phone,” said Rami Kahwash, M.D., director of the Heart and Vascular Research Organization and site leader for the trial at Ohio State. “The goal is to keep the patient within a normal range, feeling well and out of the hospital.”

A previous, small observational study compared hospitalizations before and after using the vest. That study showed an 87 percent reduction in heart failure hospitalizations with vest lung fluid monitoring.

Kenny McIntyre, 59, of Columbus, has been hospitalized twice in the three months since he was diagnosed with heart failure. He recently joined the trial and says the vest is easy to use.

“I’m the type that, unless something hurts me, I don’t want to go to a doctor,” McIntyre said. “I just put the vest on, lay back, hit a button, and let it take my measurements. Every now and then they alter my medications.”

Patients in the trial will be followed for up to nine months.

Watch the VIDEO "Technologies to Reduce Heart Failure Readmissions," an interview with William Abraham at TCT 2016"