The mitral valve anatomy is extremely complex, which has caused many challenges for transcatheter mitral valve replacement (TMVR), transcatheter delivery of valve-in-valve (VIV), valve-in-ring (VIR) and valve-in-mitral annular calcification (VIMAC) procedures. The landing zone for implanted valves is very small, and the length of the valves used can cause left ventricular outflow tract (LVOT) obstruction. Paravalvular leaks are also common because of placing a round valve in the D-shaped hole of the mitral annulus.

Cardiology researchers at Emory University found a method to increase success based on geometry and figuring out the ideal delivery angle for these valves on pre-procedural computed tomography (CT) scans. They published their "Emory Angle" technique in JACC Cardiovascular Interventions October 2020,[1]  and it was explained in structural heart sessions at the Society of Cardiovascular Angiography and Interventions (SCAI) 2021 meeting.

One of the lessons learned in the past few years of performing these mitral valve implantations, most commonly with the Edwards Lifesciences Sapien transcatheter aortic valve, has been each patient’s anatomy is different. This means the angle the delivery catheter is deployed plays a big role in successful deployments and this can vary from patient-to-patient. This has become more important as these procedures have moved primarily to a venous-transeptal puncture approach for access, which requires a bend to enter the mitral valve.

“At Emory, we devised the Emory Angle, and this was in an effort to prevent paravalvular leak,” said Kendra J. Grubb, M.D., MHA, FACC, associate professor, surgery and medicine, surgical director, structural heart and valve center, Emory University. “The annular to apical angle, or Emory Angle, was designed to ensure coaxial mitral implantation of the Sapien 3 valve. Valve malalignment and variable implant depth results in failure of the skirt to seal in the ring.”

In the CT imaging workup, the optimal annular to apical angle needed to ensure coaxial mitral implant of a Sapien valve. This measurement is the optimal angle of the delivery catheter needed for the valve to seat probably in the small landing zone of the mitral valve annulus. Seating the valve properly can help prevent embolizations and paravalvular leaks.

Grubb explained the Emory Angle predicts noncoaxial Sapien valve canting. “If you are about 15 degrees off, the skirt of the Sapien 3 will fail to seal on the mitral valve ring, and on the Sapien Ultra, you have about 20 degrees,” she explained.

She said this occurs because the guidewire is in the apex of the ventricle, causing the valve to deploy at a suboptimal angle. To overcome this, the Emory team uses a wire to create an apical rail to help guide the valve to the proper annual alignment. They externalize the wire via a transapical puncture and needle the wire straight through the chest wall, into the apex of the heart.

Before using this technique, Emory experienced 30 percent mild to severe PVL due to valve misalignment. After implementing the technique, Grubb said this was reduced to zero. She also said Event-free 30 day survival was at 70 percent prior to the Emory Angle technique and increased to 92 percent after implementing it.

She said use of the Sapien 3 Ultra valve also can help reduce paravalvular leaks because it has a larger skirt to seal annulus. 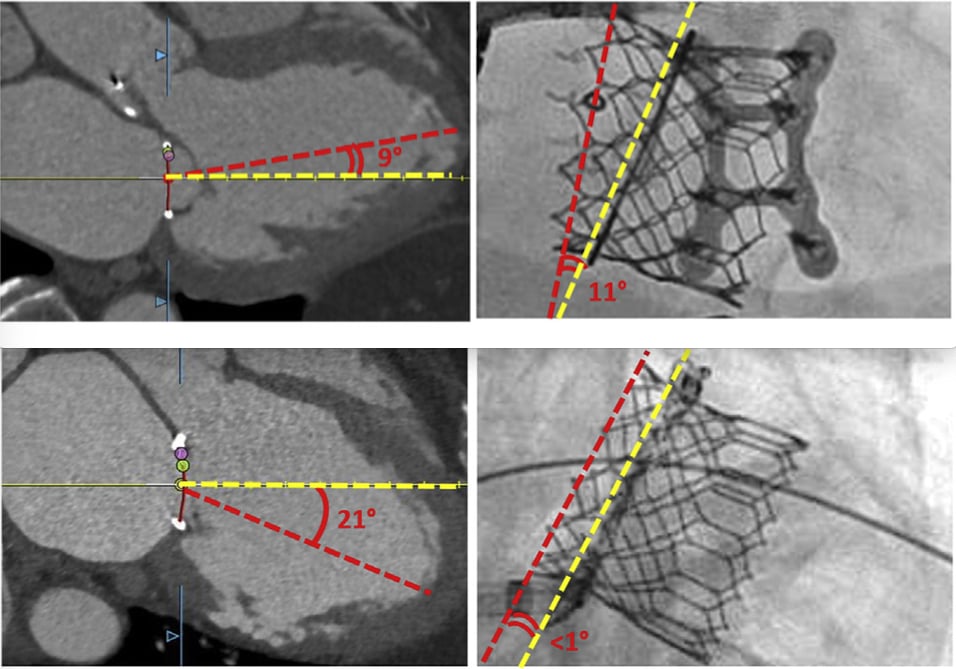 Application of the Emory Angle: Two representative cases demonstrate the canting angle before (E to G) and after (H to J) adopting the new strategy. (E to G) CT-derived Emory angles in (E) bicommissural (medial-lateral) and (F) LV outflow tract (anteroposterior) planes with (G) noncoaxial (canted) deployment evident on fluoroscopy in a case before we adopted selective guidewire exteriorization. (H to J) A case that illustrates improved valve alignment despite large Emory angle by externalizing the guidewire through a percutaneous para-apical sheath. Image courtesy of Kendra Grubb, M.D.

Application of the Emory TMVR Angle

Grubb and other researchers at Emory found there usually is a discordance between mitral annular centerline and valve orientation, which is imposed by guidewire position within the left ventricular apex. The Sapien valve's intrinsic angle is determined by its external skirt height. The Emory angle is determined on pre-procedural CT scans used to plan the procedure.

To orientate the valve perpendicular to the annual mitral valve plane to meet the Emory Angle correctly, an exteriorized apical guidewire is used, that is passed through the apex of the heart and through the chest wall.

In her presentation at SCAI, Grubb recapped findings from a few studies to outline the need for improved deployment technique when using the Sapien valve in VIV and VIR procedures. She reiterated it also does not help that a round valve is being used in a D-shaped hole, so more needs to b done to plan and seat the valve in the best position possible. She noted that just because current procedures are performed technically does not mean that they are necessarily successful and have poor outcomes.

In the VIVID Registry for VIV procedures, she said procedural technical success was 82 percent, but data show device success was only 32 percent.[2] The registry found incidents of malposition, embolization and migration of the valves in 7 percent of the procedures. A second valve was required in 10 percent of procedures. LVOT obstruction occurred in 6 percent, and Mitral regurgitation also remained a problem in 16.6 percent of patients.

“The four-year survival was less than 50 percent, so while it demonstrated technical feasibility, these were not necessarily stellar results,” Grubb explained.

A more recent study shows improvements in outcomes in the MITRAL Trial results, published in 2021.[3] The study looked at TMVR with Sapien used in failed mitral ring repairs. Technical success was lower, at 66.7 percent, but the trial had no LVOT obstructions. This was likely due to all patients undergoing pre-procedural cardiac CT analysis, planning for LVOT and evaluation for LVOT obstruction. Mitral regurgitation was still around 20 percent, need for second valve at 10 percent, and one-year mortality was 23.3 percent.

After six patients requiring a second valve in this trial, the landing zone was modified to be more ventricular, so the valve was placed about 80 in the left ventricle and 20 percent atrial, which helped better seat the Sapien valve

Another study of 248 patients that looked at TMVR for degenerated bioprosthetic valves and failed annuloplasty rings also showed there is room for improvement.

“They were able to to the valve-in-ring procedure with 83 percent of patients, however, there was a high frequency of needing a second valve implantation in 11.1 percent,” explained Grubb. “This was essentially where they essentially missed placing the sealing skirt on the ring. There also were more frequent reinterventions, at 16.7 percent, and high rates of post-procedural mitral regurgitation of moderate or greater, in 19.4 percent of patients.”

She said outcomes in the trials mentioned above played a big part in leading her institution to devise the Emory angle in an effort to further reduce parvalvular leak and poor outcomes.