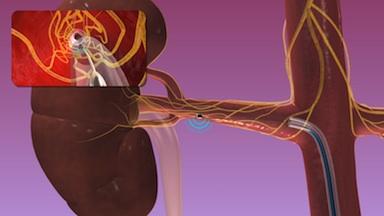 A major disappointment earlier this year was the announcement by Medtronic that its renal denervation system failed to meet its primary endpoint for efficacy in the U.S. SYMPLICITY HTN-3 trial. This trial data was presented to a packed, standing-room only crowd of several thousand cardiologists at the American College of Cardiology (ACC) 63rd annual scientific session in March. These attendees also sought more information and a glimmer of hope for the technology at the presentation of data from the Global SYMPLICITY registry and numerous sessions on renal denervation technology.

In the SYMPLICITY HTN-3 trial, renal denervation (RDN) fell short of primary and secondary efficacy goals in patients with severe resistant hypertension, but did meet the primary safety endpoints. This pivotal trial is the largest study conducted of renal artery denervation as a treatment for drug-resistant hypertension and the most rigorously designed, including blinding and a sham treatment in the control arm.

This study randomly assigned 535 patients with resistant hypertension and systolic blood pressure of 160 mmHg or higher to renal denervation or angiography alone. Both groups remained on treatment regimens of three or more antihypertensive drugs, including a diuretic, at the highest tolerated doses. RDN failed to achieve the primary efficacy endpoint of a decrease in systolic blood pressure measured in the doctor’s office from baseline to six months, or the powered secondary efficacy endpoint of decrease in average 24-hour levels by ambulatory blood pressure monitoring, which provides more reliable readings. Both study groups showed a statistically significant decrease at six months compared with baseline.

While renal denervation lowered blood pressure by an average of 14.1 mmHg, it was not statistically significant when compared to the sham treatment. Patients receiving no treatment showed a Hawthorne effect, believing they had received the treatment, resulting in an 11.7 mmHg reduction.

“That is a fascinating result because it highlights the importance of a properly done, rigorous randomized trial that is both blinded and sham-controlled,” said Deepak L. Bhatt, M.D., M.P.H., executive director of interventional cardiovascular programs, Brigham and Women’s Hospital Heart and Vascular Center, professor of medicine at Harvard Medical School, and co-principal investigator. “This is the first blinded trial or sham-controlled trial in the field of renal denervation. It seems that these factors really mattered. We saw no added treatment benefit of renal denervation for patients with severe resistant hypertension who were closely monitored and optimally treated with medications.”

Poor Results Due to First-Generation Renal Denervation Device Being Used?

Bhatt said the trial outcomes were a big surprise because previous trials had found benefit, and he speculated as to why this trial was different. “The prior work that was done stands and was solid data,” he explained. Bhatt theorized the differences in this trial might be due to the type of catheter used or the duration of the ablation therapy used.

“Was it the specific catheter or was it the way that catheter applies energy?” Bhatt said. “The duration of therapy may have been too short, but prior studies had found benefit with treatments within the same time frame.”

The trial used the first-generation Medtronic Symplicity catheter, which uses a single electrode that must be maneuvered into specific positions for ablations that last about a minute each. The procedure is similar to cardiac ablations to isolate arrhythmia-causing cardiac tissue. Electrophyiology ablations are sometimes difficult to perform or have mixed outcomes, depending on several factors, including catheter pressure applied, duration of the ablation and the ability of the operator to connect all the dots between ablation points to prevent the transmission of electrical signals across the scarred areas.

Next-generation RDN catheters attempt to solve some of these issues with multi-electrode designs. Medtronic’s second-generation Symplicity Spyral catheter eliminates the need for catheter tip maneuvers by using a wire movement to curl the catheter into a corkscrew spiral with several electrode points. Boston Scientific’s Vessix uses a balloon lined with several ablation electrodes to ensure good apposition against the vessel wall. St. Jude Medical’s EnligHTN catheter uses four electrodes on separate expandable struts to ensure contact with the renal artery wall. Covidien’s OneShot system uses a continuous spiral electrode wrapped around a balloon to enable a single ablation treatment. All of these systems have CE mark approval in Europe and have shown positive results in their trial data.

“Further studies in rigorously designed trials will be needed to confirm the results of the earlier trials,” Bhatt said.

While the U.S. pivotal trial did not show efficacy for the Symplicity catheter, data presented at ACC.14 for the Global SYMPLICITY Registry painted a different picture, showing a nearly 20 percent reduction in blood pressure in the same patient population as the SYMPLICITY HTN-3 trial. Patients with uncontrolled high blood pressure treated with RDN had low rates of adverse events and significant lowering of blood pressure at six months. The registry is the first and largest dataset of patients treated with renal denervation. The open-label, multicenter study was established to examine the safety and effectiveness of the procedure. Outcomes presented were for the first 1,000 consecutively enrolled patients at six months.

“This study shows that renal denervation may be an alternative treatment for uncontrolled hypertension,” said Michael Böhm, M.D., Ph.D., University of Saarland in Homburg, Germany, and lead investigator of the study. “Our study provides a significant contribution to the discussion about renal denervation when considering the procedure for high-risk patients who are suffering from uncontrolled hypertension and have exhausted all other options.”

The Future of Renal Denervation

Bhatt said the results of the U.S. trial do not spell the end for RDN, but its approach may need to change. “It may need a reboot, but I do not think it is dead,” he explained. “Our trial may have been so rigorous that we might not have been able to see a benefit as we would in real life. Personally, I would be cautious about prescribing a patient this therapy in light of the large trial data.”

However, he cautioned that the outcomes might vary in different patient populations, so more research is needed. The panelists discussing the results following the SYMPLICITY HTN-3 presentation agreed. While the results were sobering and have tempered the original hype surrounding the technology, its merits will provoke further study.

“In the Global SYMPLICITY registry there was a 20 percent reduction in patients with a blood pressure of more than 160, which is the same patient population as SYMPLICITY HTN-3, so from my view, that fuels the fire that this technology does something,” said Michael Jaff, D.O., chair of the Mass General Hospital Institute for Heart, Vascular and Stroke Care, who was part of the imaging core lab for the trial. “It is just a matter of figuring out who the right patients are for this therapy."

He said moving forward, it will be important to know if patient selection is important. Patients with high sympathetic drive might benefit most, including patients who are younger, nonwhites and those with heart failure. He said the device technology used or even the type of ablation energy used may determine the improved outcomes.

One thing that would help improve patient assessments is a marker to show if the renal nerves are actually denervated by this procedure.

“We don’t have an objective way to really assess if the nerves were actually denervated, so we don’t know if it did what it is supposed to do,” Jaff said. “We also don’t know how many nerves we need to denervate in order to lower someone’s blood pressure.”

"The field has really exploded with several devices in clinical practice despite lack of compelling data to support their use. Now we have some definitive data with one device,” Bhatt said. “However, we do think research in the field should continue, especially to see if renal denervation is useful in other areas, such as heart failure or with alternative approaches. We’ve shown renal artery denervation is very safe.”