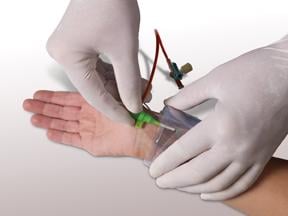 With a growing list of “never events” from the Centers for Medicare & Medicaid Services (CMS) that can significantly reduce reimbursements, there is a heightened interest in all areas of medicine to increase patient safety. In the cath lab physicians are looking for ways to reduce complications, and one method already in widespread use outside the U.S., is radial access instead of femoral access for PCI.

Bleeding and infections at the femoral access site are frequent reasons for the readmission of patients who recently underwent an angiography or PCI. There are also issues with vascular closure of femoral access sites because of the size and pressure of the vessel. The location of the puncture site also ensures it will be under strain from patient movements, such as standing and walking.

The transradial approach has been shown to reduce bleeding complications. When the femoral access approach is used, there is a 2.8 percent risk of bleeding or nerve damage, according to studies. A recent German study found about 2 percent of patients undergoing cardiac catheterization have femoral complications, including acquired femoral arterio-venous fistulas and arterial pseudoaneurysms (1). Most patients spend at least one night in the hospital to monitor any bleeding issues. More than 5,000 radial procedures have been performed at Baptist Cardiac & Vascular Institute, and the bleeding complication rate is only 0.3 percent and none suffered nerve damage.

Radial access usage rates outside the U.S. are about 40 percent and higher. In the U.S., only between 2 and 4 percent of PCIs are done radially, said Paul Zimnik, DO, executive director of the Patient Medical Association (PAMEAS), a patient advocacy group that is lobbying for wider adoption of radial access. He said radial access helps eliminate overnight hospital admissions, reduces bleeding complications and has a low entry cost for physicians, because it does not require a large equipment outlay. “It makes sense from a cost and safety perspective,” Zimnik said.

These are the points PAMEAS makes to lawmakers involved in healthcare policy in Washington D.C. He said Americans are seen as leaders in healthcare, but lag behind other countries in using radial access. “Why is it that?” Zimnik asks. “American cardiologists are leaders in the cardiology field, why is there this disparity… This isn’t rocket science, it’s just learning some new dexterity.” He hopes radial access will help both lower healthcare costs and improve patient safety.

“The government is looking at ways to bring down healthcare costs… Radial access is clearly a procedure that has very positive costs savings,” Zimnik said. “You can essentially establish an outpatient interventional cardiology program with radial access.”

Bleeding complications is what inspired Jennifer Tremmel, M.D., MS, clinical director, interventional cardiology, Women’s Heart Health at Stanford, Calif., to become a big promoter of radial access. She wanted to decrease bleeding in her female patients, who she says are two or three times more likely to experience bleeding compared to men.

“It always bothered me and we wanted a way to avoid them – we just accepted the bleeding complications,” she said. “We have to decide it is unacceptable that we have these bleeds.”

She generally uses catheters ranging in size between 5 and 7 Fr. for radial access procedures. She said table setup is different and the techs had to learn the proper setup to help prep patients. “It’s not that different – it’s just a different access site,” Dr. Tremmel said. There is a learning curve, but she was performing interventions on CTOs and bifurcated lesions within the first couple months.

“I am enthusiastic about this approach, especially in the interventional arena where bleeding is more likely,” said Thomas Combs, M.D., FACC, Bend Memorial Clinic in Bend, Ore. “It is also useful in the very obese patient in which femoral access can be somewhat of a blind adventure, and in the very thin, particularly women who have a higher risk of bleeding.”

He said it eliminates bleeding complications and improves patient comfort. It also offers a big advantage in STEMI and patients who cannot be taken off Coumadin. Dr. Combs emphasizes the utility of this approach in STEMI patients, especially with the increasing data that bleeding is associated with increased mortality in this group.

“I consider myself to be of average talent and did not find this approach difficult to learn, and I had to teach myself how to do it,” Dr. Combs said. “There are a few tricks along the way. For example, sometimes the guide wire preferably goes down the descending aorta, but having the patient take a deep breath will usually redirect it to the ascending aorta.”

He said it is helpful to have someone experienced with the procedure available for the first few cases.

“I believe 75 percent of patients would be candidates for the radial approach if it were an option,” said Ramon Quesada, M.D., medical director of interventional cardiology at Baptist Cardiac & Vascular Institute, Miami, who spoke at the 21st annual International Symposium on Endovascular Therapy (ISET) this spring. “The radial approach is a bit more technically challenging for physicians, but once they master it, I think most would prefer it. One of the main barriers is a lack of training opportunities.”

Mark L. Smucker, M.D., director of cardiology, Goshen General Hospital in Indiana, has used radial access for the majority of his angioplasties since learning the technique in the mid-1990s.

“The nurses who care for these patients are probably the most vocal advocates,” Dr. Smucker said. “Patients who have had radial cath for PCI just don’t have entry site complications and get out of the hospital in two and a half hours after a cath with no troubles after.”

Users say radial access greatly improves patient comfort. Dr. Combs said patients do not have stay in bed, they can sit up to eat, and can walk to the bathroom. These factors alone significantly reduce the amount of nursing care for each patient, he said.

“It did not take long before the nursing staff became quite upset if I did a femoral artery approach, as they found patient care and satisfaction much improved with the transradial cath,” Dr. Combs said.

“I have found the technique to be incredibly popular with my patients,” Dr. Smucker said. “It is not infrequent that patients are either self-referred or referred from other doctors, because they have heard from my other patients how easy it is to go through this procedure.”

Dr. Tremmel said patients hate to lie flat, especially if they have back problems, and they don’t like to be confined. “I had heard patients liked it more and I said ‘whatever,’ but after using the procedure its true – the patients do like it better,” she said. “I feel like I’m doing my patients a disservice now if I have to use the femoral approach.”

Zimnik said the main reason radial access has not taken off in the U.S. is because it is not part of fellowship training. He said most physicians tend to stick with training that results in known outcomes, instead of attempting new techniques they are unfamiliar with. However, he said some hospital training programs are adopting radial as part of their fellows program, including Texas Heart, Stanford and St. Vincent’s.

“My feeling is that it should be a part of training programs, as it is very useful,” Dr. Combs said. “Even if not a cardiologist’s primary approach, it can “save the day” in patients who lack femoral access.”

“All you need is a patient who has had a procedure femorally and radially and there is no question [which they prefer],” Clifton said.

It is sometimes difficult to reach the left internal mammary artery from the right wrist, but Dr. Combs said access is easily made from the left wrist. However, this can be difficult in some cath labs where space on the right side of the table is limited.

Dr. Combs said complications from the radial approach include perforation of the brachial artery. There is the potential of hand claudication if there is an inadequate ulnar collateral artery and the radial artery occludes.

A big limitation to radial access is that standard length transcatheter devices are just not long enough to reach some areas for treatment, Dr. Tremmel said. She said this limits its use to treat PAD in the legs. “That is really important – the tools need to advance,” she said.

She said another disadvantage of radial access includes working closer to the radiation field, which could expose the physician to a higher X-ray dose.

VIDEO: New Frontiers in Radial Access — an interview with Mladen I. Vidovich, M.D.