Results from the Onyx ONE Study reported at TCT 2019 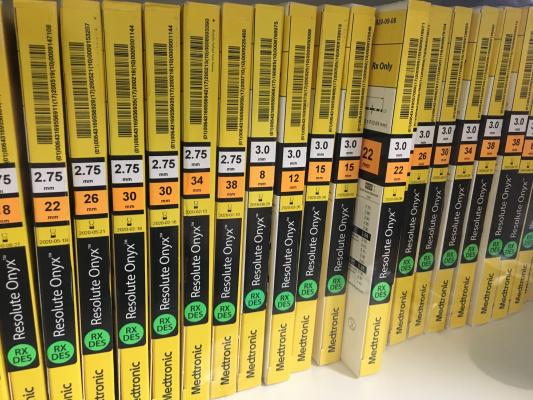 September 30, 2019 – The first randomized trial to compare a durable polymer drug-eluting stent to a polymer-free drug-coated stent in patients at high risk of bleeding and treated with one-month dual antiplatelet therapy (DAPT) found that both are clinically safe and effective.

Findings from the Onyx ONE trial were reported at the 31st annual Transcatheter Cardiovascular Therapeutics (TCT) scientific symposium, Sept. 25-29 in San Francisco, sponsored by the Cardiovascular Research Foundation (CRF).

Up to 40 percent of patients undergoing percutaneous coronary intervention (PCI) have high bleeding risk (HBR) characteristics, and current guidelines recommend three to six months of DAPT for HBR patients undergoing PCI, with consideration for DAPT duration as short as one month in selected patients. However, there are scant randomized data with shorter durations of DAPT, especially for current-generation polymer-based DES. The Onyx ONE trial compared a polymer-based DES compared to polymer-free drug-coated stents (DCS) in HBR patients treated with one-month DAPT (aspirin and an oral P2Y12 inhibitor).

“The Onyx ONE global randomized trial is the first study to evaluate outcomes between a polymer-based DES and a polymer-free DCS with one-month DAPT after PCI in a complex patient population,” said Stephan Windecker, M.D., director and chief physician, Department of Cardiology at the Swiss Cardiovascular Center in Bern, Switzerland. “The data shows that the polymer-based zotarolimus-eluting stent is as safe and effective as the polymer-free drug-coated stent in HBR patients treated with one- month DAPT and provides important evidence to inform clinical decision-making for high bleeding risk patients.”