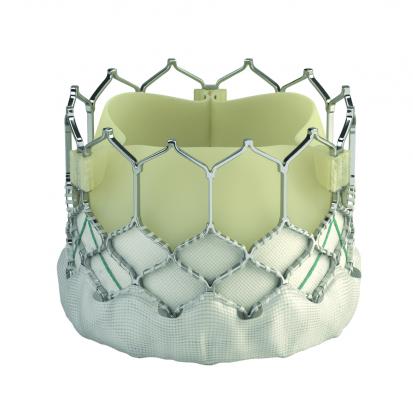 October 3, 2019 – Five-year results from the PARTNER 2A Trial found patients with severe aortic stenosis (AS) and intermediate surgical risk who underwent Sapien 3 transcatheter aortic valve replacement (TAVR) had similar rates of death and disabling stroke compared to those who had surgical aortic valve replacement (SAVR). However, TAVR using a transthoracic approach had poorer outcomes compared to SAVR.

Two-year results from the PARTNER 2A trial concluded that TAVR was similar to surgery for the primary endpoint of death or disabling stroke in patients with severe AS and intermediate surgical risk. However, there are limited data on longer-term clinical outcomes and bioprosthetic valve function in this population. The goal of the current trial was to compare the key clinical outcomes, bioprosthetic valve function, and quality-of-life measures at five years for TAVR versus surgery.

Researchers randomly assigned 2,032 intermediate-risk patients with severe AS to either TAVR or SAVR at 57 centers. The two-year primary endpoint was all-cause death or disabling stroke in the intention to treat (ITT) population. At five years, all primary and secondary clinical and echo endpoints were analyzed in both ITT and pre-specified as-treated (AT) populations.

However, in the transthoracic cohort, the rate of death or disabling stroke was significantly higher after TAVR (59.3% versus 48.3%; HR: 1.32; 95% CI: 1.02 to 1.71; P=0.03). In addition, early improvements in functional status and quality of life were maintained through five years for both TAVR and SAVR patients.

“In the longest follow-up for intermediate-risk patients with severe AS, TAVR and SAVR had similar rates of death or disabling stroke,” said Vinod H. Thourani, M.D., chair of the Department of Cardiac Surgery at Medstar Heart and Vascular Institute. “Therefore, TAVR should be considered as an alternative to surgery in intermediate-risk patients with severe aortic stenosis. However, in patients without acceptable transfemoral access, surgery may be the preferred alternative.”