Regardless of the number of anti-hypertensive medications, majority of patients with highest BP showed significant drops at three years 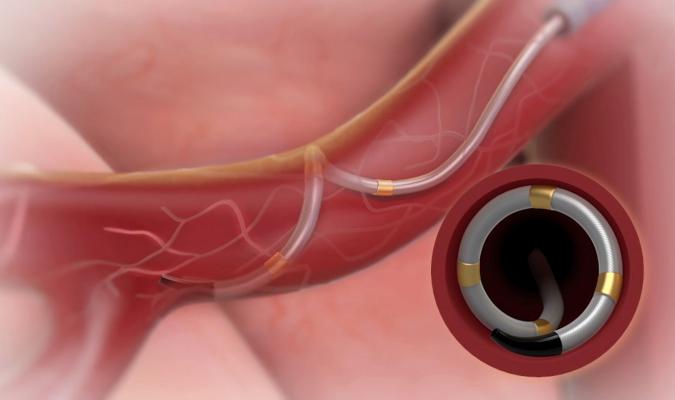 The Medtronic Symplicity Spyral renal denervation catheter in the renal artery, showing how its four electrodes contact the vessel wall for a single RF energy delivery procedure. By ablating the vessel walls, it props the vessel in a fully open position, allowing the kidneys to better filter the blood and remove excess water in hypertension patients.

The study showed RDN led to significant and clinically meaningful reductions in hypertension that were sustained out to three years post-procedure (17 mmHg OSBP (office systolic blood pressure)), with more patients achieving BP below 140 mmHg, while those at very high BP levels experiencing drops into lower risk BP ranges. The number of patients at the very highest BP level – greater than 180 mmHg systolic at baseline – dropped by two-thirds at three years. Additionally, the number of patients who had reported office systolic BP less than 140 mmHg – a more controlled level of BP – increased from 13 percent at baseline to 39 percent at three years. The BP drops occurred while patients were prescribed an average of four or more anti-hypertensive medications, which remained unchanged over three years. The absence of increase in medications suggest that RDN’s effect was independent of anti-hypertensive medication burden. RDN continued to show a strong safety profile at three years with an incidence of renal artery stenosis of 0.3 percent, which is within the expected range for patients with hypertension not undergoing denervation.

“In the largest real-world study of patients receiving renal denervation, we are seeing significant and clinically meaningful reductions in both office and 24-hr blood pressure sustained out to three years post-procedure, which demonstrates the durability of RDN,” said Felix Mahfoud, M.D., cardiologist at Saarland University Medical Center in Homburg, Germany, who presented the data during the meeting. “These data reinforce that RDN is a viable, complementary option with positive effects on hypertensive patients without requiring an increase in medication burden over time.”

The Global SYMPLICITY Registry is the largest study documenting the long-term safety and effectiveness of the Medtronic renal denervation systems in a real-world setting in patients with uncontrolled hypertension. To date, the registry has enrolled more than 2,860 patients treated with RDN and includes three-year follow-up for more than 2,500 patients. The data presented at PCR closely mirror a recent manuscript of GSR data published in JACC, which reported that RDN showed lasting results in a variety of high-risk patients, including those with diabetes, chronic kidney disease (CKD), isolated systolic hypertension (ISH), or resistant hypertension.

"Following the positive SPYRAL HTN-OFF MED Pivotal data presented at ACC, these new data provide additional evidence on the safety and efficacy of renal denervation to help manage uncontrolled hypertension, with study patients experiencing meaningful blood pressure reductions out to several years,” said Dave Moeller, vice president and general manager of the Coronary and Renal Denervation business, which is part of the Cardiac and Vascular Group at Medtronic. "As the body of clinical evidence supporting renal denervation grows, we are encouraged by the outcomes observed in both controlled clinical trials and real-world practice.”

Hypertension is the single largest contributor to cardiovascular death; it dramatically increases risk of heart attack, stroke, heart failure, and kidney failure. The annual direct costs of hypertension are estimated at $500 billion worldwide. It is estimated that almost 20 percent of patients are completely non-adherent to oral medications while nearly half are partially non-adherent, highlighting the need for alternative treatment options.

In addition to the Global SYMPLICITY Registry, the Medtronic SPYRAL HTN Global Clinical Program includes the SPYRAL HTN-OFF MED PIVOTAL and SPYRAL HTN-ON MED Trials, both prospectively powered, randomized, sham-controlled studies evaluating patients with uncontrolled blood pressure in the absence and presence of prescribed anti-hypertensive medications respectively. Approved for commercial use in more than 50 countries around the world, the Symplicity Spyral system is limited to investigational use in the United States.